Android Distribution: Lollipop is the Most Popular Version While Nougat Haas a 0.4% Market Share

A new month has just started and with that Google has released the latest Android distribution numbers that are meant to show us which Android versions are popular and which ones aren’t.

The latest numbers released by Google show that Android 5.0 and 5.1 Lollipop are the most popular variants at the moment. They have a combined market share of 34%, this is a drop of 0.1% from the same period last month but is still quite a huge percentage for an OS that was first released in November 2014.

Android 6.0 Marshmallow comes in second with a 26.3% market share. This variant has actually gained some market share from last month when it controlled 24% of the Android ecosystem. Even with the release of Android Nougat, it looks like Marshmallow is still going strong. Speaking of Android Nougat, it has a 0.4% market share up from last month when it had a 0.3% share. This is a small percentage but expect it to be much bigger in 2017 as manufacturers release new device that come with the OS preinstalled. It will especially go up in Q1 of 2017 as we expect to see quite a number of big manufacturers release new devices. 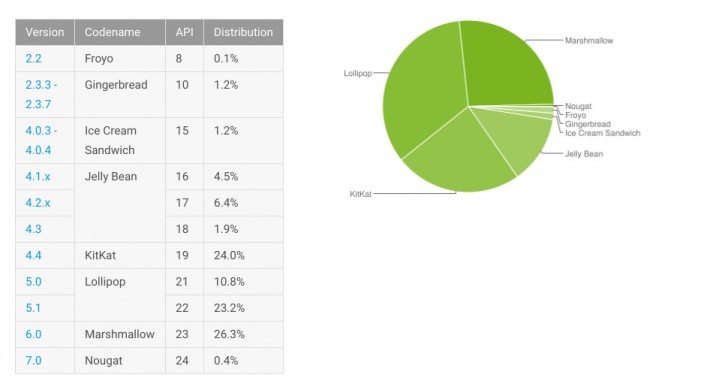 At the moment, Android Marshmallow is still seeing significant growth in its market share as some manufacturers are still releasing new devices that come with that variant. Most of these manufacturers tend to skin their phones with Custom UIs and they have not had a chance to test out and customize Android Nougat to match their needs.

Android KitKat on the other hand currently has a 24% market share, a drop from last month when it had a 25.2% market share. Some older Android variants are still around with Jelly Bean having a 12.8% market share, down from 13.7% recorded last month. Ice Cream Sandwich and Gingerbread both having a market share of 1.2%.