WhatsApp Working on a New Option for Disappearing Messages

WhatsApp added its disappearing messages feature in 2020. Disappearing messages allows you to send messages that have a pre-determined period after which they vanish. For WhatsApp, that time was fixed on 7 days which starts immediately when the message is sent.

A report from WABetaInfo claims the company is testing another 24-hour option. It will be an addition to the 7-day option, giving the feature some flexibility. The new option has been spotted in the beta version of the app for iOS.

It first appeared in an early build of the app in March, but fresh details showcase the options screen. You will see three options under disappearing messages – Off, 24 hours, and 7 days. 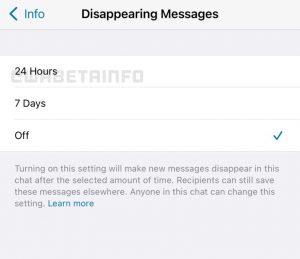 These settings will be available both for personal and group chats.

The new feature will be included in a future update of WhatsApp across supported platforms, including Android, iOS and Web/Desktop.

Another upcoming WhatsApp feature spotted in development is an easy way for users to move chats from iOS to Android.  It’s part of the multi-device system WhatsApp has been working on for a while. Multi-device support for the uninformed will allow you to run one account across two devices independently.

The instant messaging platform is also working on encrypted cloud backups to secure chats stored in third-party cloud storage services like Google Drive and iCloud. You will have to set a password to your chat and media backup, which will be required before restoration in the future.

Like the new 24-hour option for disappearing messages, encrypted chat backups and native support for message transfer from iOS to Android have no specific launch date. So don’t hold your breath for now.

Read Next: Why You Need Your M-PESA PIN When Using Safaricom’s Zuri ChatBot