Late last week, Android Oreo update started seeding to some Galaxy S8 users in Germany. This was the first phase and as I said last week, I expect more users to get the update in the coming weeks.

Samsung has finally expanded availability of this particular update to three more countries that include Poland, India and France. These are not that many countries but it’s a good start and hopefully we will be seeing it to more S8 users in more countries before the end of the month.

The update is about 487MB in size and is available for both the Samsung Galaxy S8 and the S8+ models with firmware version G950/G955-FXXU1CRAP. 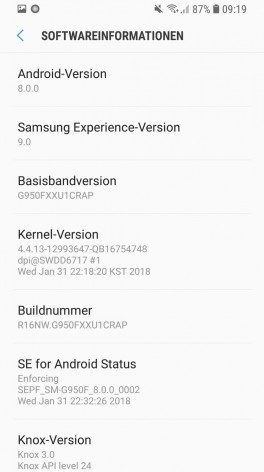 As the update roll out, it is being reported that in India and Poland it is only rolling out to those who took part in the Oreo beta program. This was expected but won’t last for long, those who did not take part in the program should be getting the update very soon.

At this point, we don’t have any information as to when the update will be available to this part of the world, I will update you when I get that information.

Read Now: These Are The Samsung Smartphones And Tablets Scheduled To Get Android Oreo