The Samsung Galaxy A9 with A 4,000mah Battery and A 6-Inch Screen Has Officially Been Launched 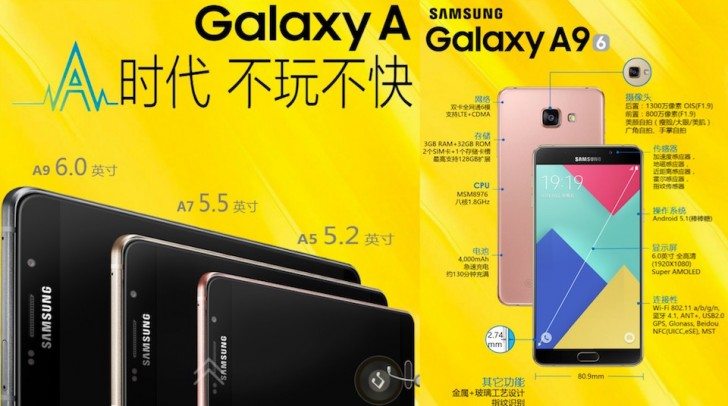 Yesterday, Samsung officially announced its latest smartphone, the Galaxy A9, in China. We have been hearing a lot about this smartphone the last couple of weeks and this launch was sort of expected. As for its specs, they are exactly what we had seen in the leaks prior to its launch.

Read More: New leak suggests that The Samsung Galaxy A9 will have a 6-inch display, 4,000mah battery and 3GB of RAM

Since the Galaxy A9 is part of the Galaxy A-Series, it has the premium build quality and specs to match that. This is the perfect smartphone for anyone who wants a Galaxy device but does not want to go all out and get the premium Galaxy S or Galaxy Note series.

Diving deep into the Galaxy A9, it has a metallic and glass design that gives it an absolutely gorgeous appeal. It is not small in size as it has a 6 inch Full HD AMOLED display with very thin bezels. Embedded in the home button is a fingerprint sensor for extra security.

Underneath, the Galaxy A9 is powered by a Snapdragon 652 processor coupled with 3GB of RAM and 32GB of storage space comes standard. This phone comes with a microSD card slot for those who want to expand the storage space.

At the back, the Samsung Galaxy A9 has a 13MP camera with a wide aperture and optical image stabilization. For selfies and video calls, the Galaxy A9 has an 8MP camera at the front. Still at the back, there is a 4,000 mAh battery underneath the frame. This battery supports Quick charging.

The Only bad thing about this phone is that it will launch with Android 5.1 Lollipop and not Android Marshmallow. It will probably be in line to get the update a few months after its official release.

The Samsung Galaxy A9 price has not been announced yet and we will probably hear more about that in a few weeks from now, probably at CES 2015.