Xiaomi has announced a new 8K capable streaming box dubbed Mi Box 4S Pro. The Mi Box 4S Pro with its attractive streaming quality only cost around $60. It includes 2GB of memory, 16GB of internal storage and runs on Xiaomi’s own MIUI skin for TV.

The Mi Box 4S is the first in the MI Box series to include 8K support which when paired with its $60 price tag makes it an attractive package. Xiaomi has previously launched the Mi Box 4S and Mi TV Stick. 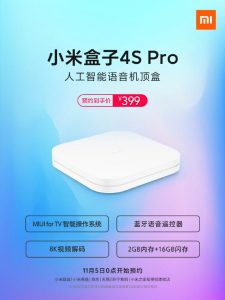 It is also equipped with Bluetooth remote, which also allows you to navigate the streaming box handsfree using voice control.

The Mi Box 4S Pro will first go on sale in China, but the company says “no global plans to share at the moment.”(via)

Read Next: The realme C12 and realme 7i Set to Be Launched in Kenya Next Week.