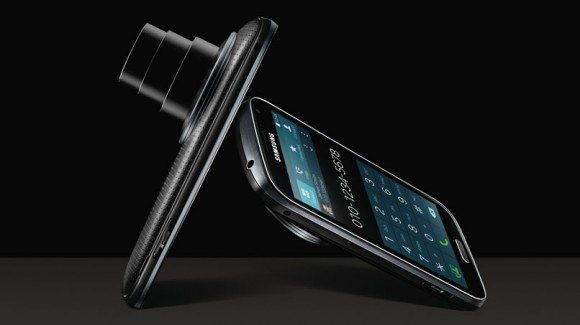 It’s a Smartphone… it’s a camera… it’s the Galaxy K Zoom, “Camera-Specialized Smartphone”.  Think of it as a thinner digital camera with a bigger touch screen, running on Android and is able to make phone calls. The Galaxy K zoom is an addition to the Galaxy zoom family from Samsung and is a major improvement from last year’s Galaxy S4 Zoom. Earlier this month, I had told you about the Galaxy K zoom and its intended launch on April 29.

April 29 has come and passed and Samsung did not disappoint as they unveiled the Galaxy K Zoom to the world. The ‘K’ is for camera (Kamera in German) and the ’Zoom’ is for the zoom lens and the ‘Galaxy’ represents Samsung’s branding.

Samsung’s Philip Berne describes the Galaxy K zoom as a “phone with cool camera stuff.” The Galaxy K Zoom may be thinner than other digital cameras but is still thicker when you look at it from the Smartphone perspective. Its thickness is twice that of the Galaxy S5 and is also way heavier. Even though this is the case, the Galaxy K zoom is a big improvement from last year’s model, the Galaxy S4 Zoom, that was even thicker and heavier. People who have had a chance to see and hold this device say it feels more natural to use as a phone and a camera.

Getting down to the details, the Galaxy K zoom has a 4.8-inch Super AMOLED screen with a resolution of 1280x720p. It is powered by a hexacore (6 core) system that consists of a quad core processor running at 1.3 GHz and a dual-core processor that runs at 1.7 GHz.

Sun Hong Lim, Senior Vice President of Mobile Communications Business at Samsung Electronics said, “With the introduction of the Galaxy K zoom, Samsung continues to demonstrate commitment to creating products that meet the diverse demands of our consumers.”

The Galaxy K zoom has 2GB of RAM and 8GB of onboard storage to store all those photos. A microSD card slot is also included just in case you need additional storage space. Power is provided by a 2,430 mAh battery.

Here’s how it works: you turn on Selfie Alarm, then set the spot in the frame for where you want your face. Then turn the phone around and point the rear camera at your face — when you’re in the frame, the K zoom beeps and then takes three pictures so you can select your favorite later. It works shockingly well, and lets you take full advantage of the camera’s powers for your selfies. –The Verge

Pricing and availability of the Galaxy K zoom remain a mystery but am sure hope Samsung will reveal soon.

The Galaxy K zoom is a great product but as for me, it is not that appealing. The main reason why I won’t get one is because it is so bulky and will be inconveniencing to carry it around every day.  I would recommend it for mobile photo enthusiasts who want to take quality photos without carrying their big digital cameras.