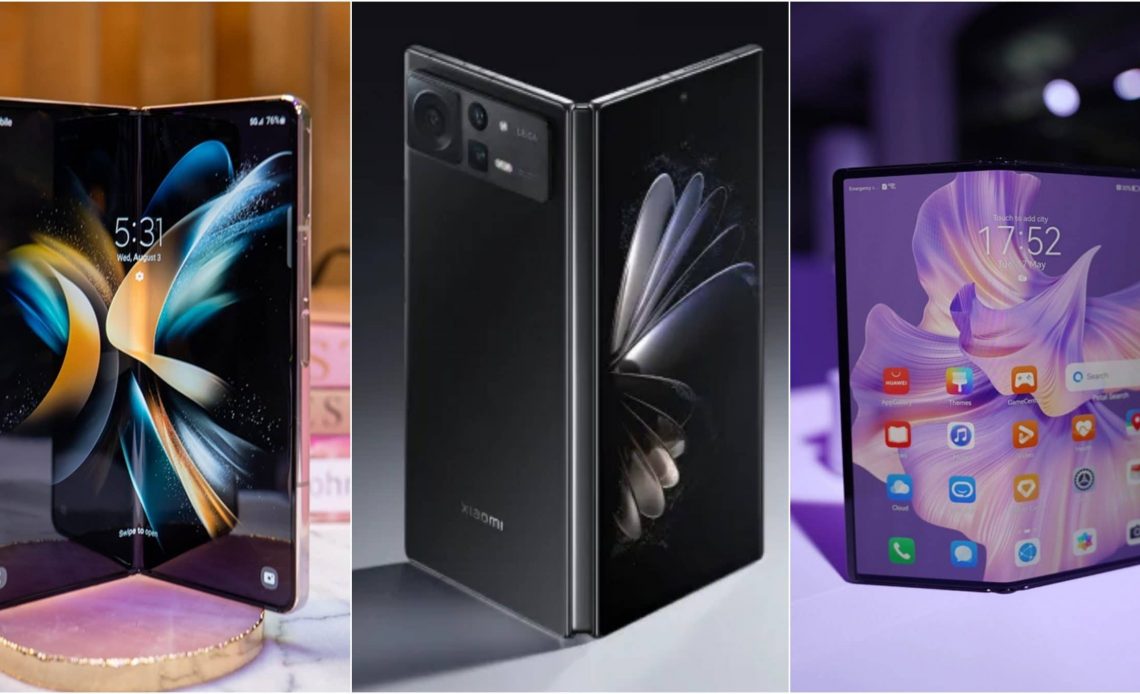 Foldable phones are the trend that some believe are the future of the industry. The Samsung Galaxy Z Fold 4 in this case is the most polished and well-rounded foldable phone around at the moment while Xiaomi’s new book-like foldable; Mix Fold 2 is hot on the Z Fold 4’s heels and Huawei is determined to stay on the cutting edge with the Mate Xs 2.

Many often say that Samsung‘s biggest competitor in the smartphone market and space is the iPhone but I tend to think that’s a lethargic narrative. Hear me out; you rarely find smartphone users jumping between the android and ios ecosystems often and matter of fact, iPhone users seem to be just happy in their fenced home with no intention of really getting out for ”a walk’ to android.

My point, in this case, is Samsung’s biggest rival in the smartphone space is another android brand, and Xiaomi, Oppo, and Huawei have actually understood their assignments in foldable phones and other normal phones. Samsung’s Galaxy Z Fold 4, Xiaomi Mix Fold 2, and Huawei Mate Xs 2’s hardware are fairly at par, give or take, with Xiaomi being Samsung Z Fold 4’s most worthy competitor. Here is a breakdown of how these three very different yet similar foldable phones compare.

I won’t be boring you by repeating stuff I have already broken down for you on the table above, just a few that need to be highlighted. Xiaomi’s Mix Fold 2 has a slightly bigger display than the other two foldable with an 8-inch foldable display. Huawei Mate Xs 2’s foldable display has shrunk a little bit more than its predecessor; the Huawei Mate Xs. You’ll be getting a 7.8-inch panel on the Xs2 compared to the 8 inches of the Xs. Galaxy Z Fold 4 features a 7.6-inch 120Hz AMOLED display with UTG (Ultra-Thin Glass).

Samsung’s addition of Gorilla Glass Victus + and an Armor Aluminum frame definitely means the Galaxy Z Fold 4 is the most durable fold yet and unmistakably, its main display is 45%+ stronger than the Z Fold 3’s. The Fold 2 also has a UTG (Ultra-Thin Glass) layer on top of its display, which should improve durability compared to plastic films. Huawei’s Mate Xs 2 has a four-layer structure of the polymer-coated display that improves durability in case of a drop considering it is an outward folding smartphone. It also has a frame that is a mix of fiberglass and ALU alloy, making it pretty flexible and durable.

As with previous Samsung Fold models, the Fold 4 doesn’t fold perfectly as it leaves a slight gap between the two screen sides. Xiaomi on the other hand folds perfectly, without showing a gap between the two halves while  Huawei folds outwards and rests perfectly at the back beside the cameras. The major worry about the Mate Xs 2 is that the screen which rests at the back is barely protected against scratches when flipped and used without a case. There is basically no way to safely place the phone on rough surfaces without a case and escaping scratches.

The performance of the Xiaomi Mix Fold 2 and Galaxy Z Fold 4 are very similar. Both smartphones feature the Qualcomm Snapdragon 8+ Gen 1 5G chipset. Huawei on the other hand feature Snapdragon 888 which is also capped at 4G connectivity. This means the Mix Xs 2 doesn’t get to enjoy 5G tech due to the restriction imposed on Huawei by the US Government. Snapdragon 888 4G should be as good as any other SD888 but you as you know, this is silicon that’s almost 2 years old.

The Mix Fold 2 and Galaxy Z Fold 4 have the same Adreno 730 GPU and can play games flawlessly and even when it comes to doing graphics-intensive tasks. The Mate Xs 2 ranks below average for many 2022 flagship smartphones, which I see as rather obvious because this is an early-2021 chipset. However, the Xs 2 is generally underdelivering in performance.

Generally, Samsung’s Galaxy Fold 4 is the culmination of Samsung’s foldable efforts and stands out as one of the most productive foldable smartphones with extra perks like wireless charging support, IPX8 water resistance, and the conspicuous S Pen Support. All these features are not available on its worthy competitor, the Xiaomi Mix Fold 2.

Huawei Mate X2 is even lighter and brings out Huawei’s first foldable design in a flawlessly compact design and an outwardly folding display which is nothing but beauty on the hands but barely protected against scratches when placed on a rough surface. It also packs crystal quality cameras, a bigger battery, and a breathtaking display but it will go without saying that it doesn’t support 5G and packs an outdated chipset.

I may buy the Huawei Mate X2, just so I can show it off because aesthetically, it’s spectacular but if I want to multitask and do more with my foldable, then Galaxy Fold 4 it is, and if I want a fairly priced but aggressively packed and performing foldable, then it will definitely be the Xiaomi Fold 2. How about you?

The Infinix Note 12i Specifications and price in Kenya

The Xiaomi Redmi A1+ (Plus) Specifications and price in Kenya

Protecting yourself from online scams in the age of digital finance