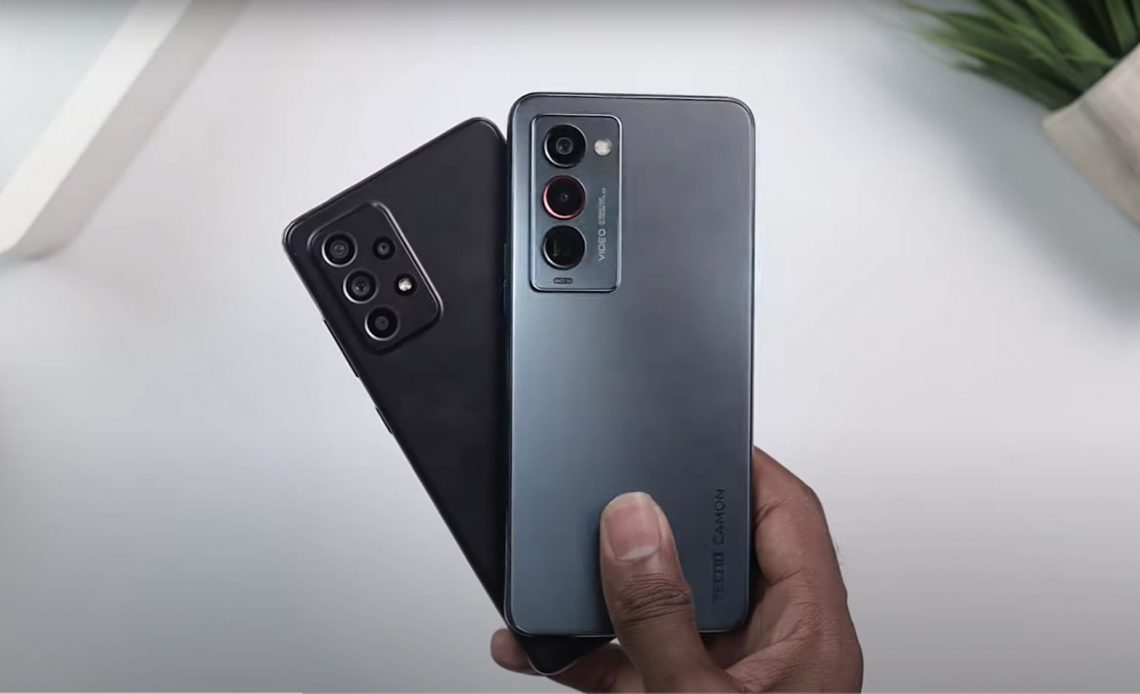 The Tecno Camon 18 Premier is the latest from Tecno and is currently available in stores for around Ksh 39,000. The is the premium version in the Camon 18 series. The others are the Camon 18 and the Camon 18p.

In this post, I will be comparing the Tecno Camon 18 Premier to the Samsung Galaxy A52. These two devices have a number of similarities with some key differences that set them apart. Both these are mid-range devices from their respective manufacturers. The A52 has been in the market for a while while the Camon 18 Premier is the latest from Tecno. In this post, we are going to look at both devices to help you decide which one is worth your money.

We will first start with the design and the build. Both devices feel similar in the hand as they are all made of plastic at the back and have a glass at the front. The a52 has  gorilla glass 5 but the same can’t be said about the Camon 18 Premier as Tecno has not shared that information. In terms of camera design, both have the same placement in terms of positioning but the Camon 18 Premier’s camera cutout seems to be slightly bigger than the A52 and nicer if you ask me.

The Tecno Camon 18 Premier has a bigger display at 6.7 inches while the A52 has a 6.5 inches display.  Both are1080p displays with 120Hz on the Camon 18 Premier and 90 hertz on the A52. Both have AMOLED panels which make them really competitive on paper but in the real life the camon 18 premier’s display seems to be more saturated and makes the A52’s display look more natural. So depending on your preference, you can go with either. The saturated look on the camon 18 premiere might be more pleasing to a lot of people but A52 is sharper and has more details to the eyes.

When it comes to performance the canon 18 premiere has Android 11 with HiOS 8, has the MediaTek Helio G96 chipset,  8GB of RAM and 256 GB of storage. When it comes to the A52, you also have android 11 with one ui 3.1. This phone comes with a snapdragon 720 chipset. HiOS high os is pretty cleaned up as compared to older versions and feels really nice and one ui is similarly as nice as well. For performance, both devices perform really well in everyday usage even the synthetic benchmark scores the caMon beats the A52 slightly in multiscore performance which is really impressive. For every day you say the camon seems to be a tad bit faster in terms of animation compared to the A52. This might be as a result of the 120Hz refresh rate on the screens, the animations seem to be a bit more faster if you compare it to the A52.

Now let’s talk about the batteries found on both devices. The Camon 18 premiere has a 4750 mAh battery while the A52 has a 4500 mAh battery. Both devices will take you throughout the day with moderate usage but will definitely drain if you heavily play games or use the device back to back. When it comes to charging speeds, the Camon 18 Premier is going to charge faster as it comes to the 33W fast charger in the box while the A52 only supports 25W fast charging. So in that department too we can say the Camon 18 Premier takes the lead.

The Camon 18 Premier has a 64 MP main camera, an 8MP hyperzoom lens, and a 12 megapixel ultrawide lens that is able to shoot videos in 4k 30 fps. When it comes to the A52, it has a 64 MP main sensor, a 12-megapixel ultra-wide lens,  a 5 megapixel macro and a 5 megapixel depth sensor. This also shoots videos in 4k 30 fps. As for the sample images from both cameras, it looks like the A52 produces more pleasing pictures compared to the Camon 18 with better dynamic range and color reproduction and in that department, I’ll give it to the A52.