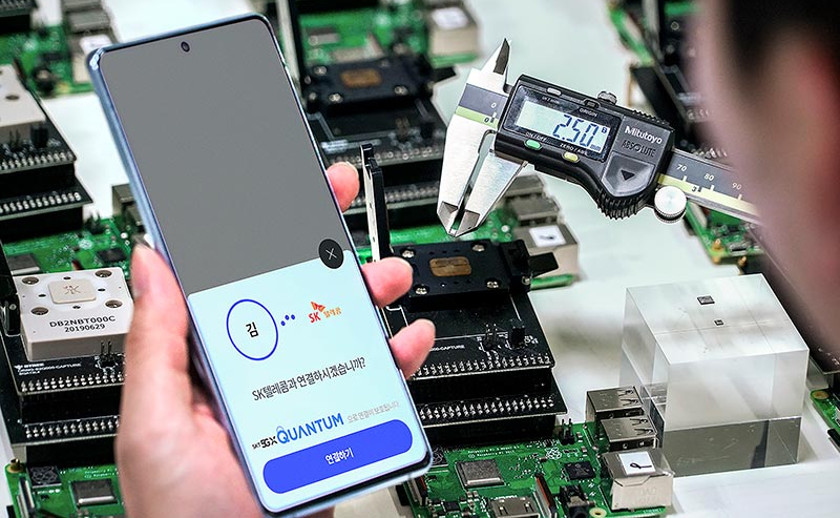 South Korean tech giant Samsung together with SK Telecom have launched a new smartphone with quantum security. The phone, known as Galaxy A Quantum, is just a rebranded Galaxy A71 5G but with top-notch security.

Galaxy A Quantum is powered by 5G and relies on Quantum Random Number Generator (QRNG) that makes it a hard crack. Unlike regular random number generators that have been embraced by 2FA and even payment platforms, QRNG generates real unpredictable random numbers.

The phone has a Quantum chipset under the hood. The chipset is composed of an LED and CMOS image sensor. The CMOS image sensor’s primary function to capture photons generated by the LED sensor to generate random number strings.

The whole point behind the advanced security features is for logging in your carrier’s account, which can be used for other services as well. It’ll also prove beneficial for storing of confidential documents and prevent forgery. Another real-world application of the QNRG chip is at offline retail stores concurrent with biometric-backed mobile payments.

Apart from the QRNG chipset, the device features other regular smartphone features. It has a 6.7-inch Super AMOLED FHD Infinity-O display, an Exynos 980 processor, 8GB of RAM and 128GB of storage. The camera system is composed of quad array on the rear( 64MP main + 12MP ultrawide + 5MP macro + 5MP depth sensor) and a single 32MP lens for selfies.

It will be available in South Korea at around $530 in black, blue, and silver colors. There is no word on worldwide availability but now that Quantum technology is making its way to smartphones, we should more of this in the future. Besides, let’s see how our hacker friends deal with SK Telecom’s bold unhackable claim.