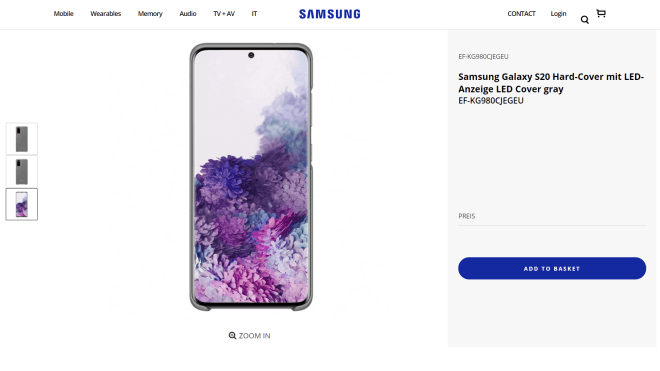 The next Samsung Galaxy Unpacked event is just around the corner, initially scheduled to take place on February 11th. It is not surprising that we have seen massive leaks and rumors almost detailing everything about Samsung’s upcoming phones in the Galaxy S Series.

Now, Samsung itself ‘accidentally’ leaked the Galaxy S20, one of their upcoming devices confirming the rather unusual naming scheme.

Galaxy S20 confirms other leaked information about the series as well, from the hole-punch selfie camera and the conspicuous tall rectangular camera bump. According to a German tech publication, the marketing images were posted in one of the company’s online stores in Europe and were pulled down quickly after.

The images also showcased a hardcover dubbed as the Galaxy S20 LED cover.

Although the company leaked marketing images of the S20 alone, the company is expected to release more than a single device next week on Tuesday. Rumour has it that the Galaxy S20 series will come in three variants – S20, S20 Plus, and S20 Ultra.

The Ultra model will be the performance beast in the series, with up to 16GB of memory. The rest of the specs leaked about the Ultra model still uphold this theme, with more than just basic specs aimed for those who love high-performance devices to stay beside them as their daily drivers.