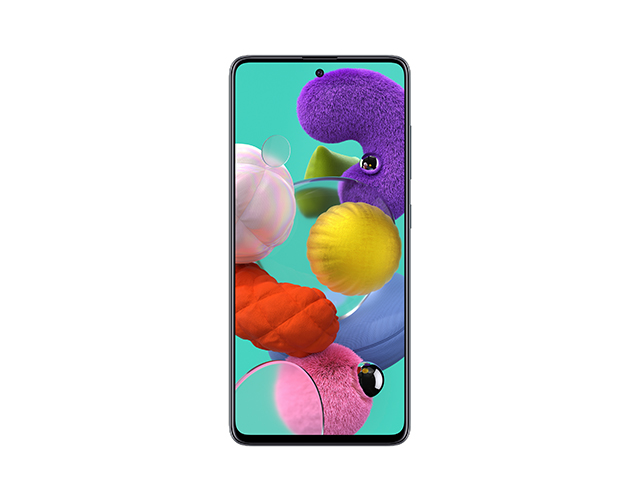 Samsung has officially unveiled two new devices under its popular Galaxy A-series lineup. Both phones sport a similar design with an Infinity-O display and an array of four cameras at the back arranged in an L-shape. However, the whole camera bump is still rectangular.

However, there are of course some notable differences under the hood between the two devices.

The Samsung Galaxy A51

Starting with the Galaxy A51, this is a 6.5-inch Infinity-O Super AMOLED display phone with FHD+ resolution. It presents itself in a cool 20:9 aspect ratio. A 32MP selfie camera is inside the display placed in a punch-hole notch at the top of the display. Samsung’s in-house Exynos 9611 SoC powers this phone and is paired with up to 8GB of RAM.

Out of the box is One UI 2 based on Android 10. The phone ships with 128GB of storage on board and if not enough, you can still add more via microSD card up to 512GB.

The primary camera here is a 48MP sensor paired with a 12MP ultrawide (123-degree view) lens, 5MP depth sensor, and a 5MP macro sensor. The battery can accommodate up to 4,000mAh of juice. A 15W fast charger comes in tow to help you juice up the phone.

Instead of the Samsung Exynos chipset, the Galaxy A71 runs on Qualcomm’s Snapdragon 730 SoC. The display here is a bit larger measuring 6.7 inches, but maintains the same resolution, which means a smaller pixel density.

On the camera front, there are a few upgrades too, like the 64MP primary sensor. The battery is also larger with 4500mAh capacity and you get to enjoy even faster-charging speeds thanks to the 25W fast charge support. For the A71, you also get the same color options as seen on the Galaxy A51.

Samsung unveiled these devices first in Vietnam. In Vietnam, the Samsung Galaxy A51 will be available as of December 27th. The Samsung Galaxy A51 comes in several models with the lowest variant shipping with 4GB RAM and 64GB storage priced at around $350. In addition to that, there is also a 6GB RAM and 8GB RAM model.

For the Galaxy A71, you have to choose between 6GB or 8GB of RAM paired with 128GB of storage. The Samsung Galaxy A71 price has not yet been revealed.