Android Distribution: Lollipop Sees Impressive Growth and Is Now Installed On 29.5% Of All Devices

Google has released the latest Android distribution number for December that show which Android versions are used by most people and which one is not. These figures are very important for developers who want to develop apps that will target the most popular Android version.

At this point, Android KitKat is still the most popular version with 36.6% market share. This is a slight drop from last month when it had a market share of 37.8%. Considering that KitKat is over two years old, this is a really bad pace we are going at.

Read More: Android KitKat is Still The Most Popular Version with Jelly Bean Following in at Second Place 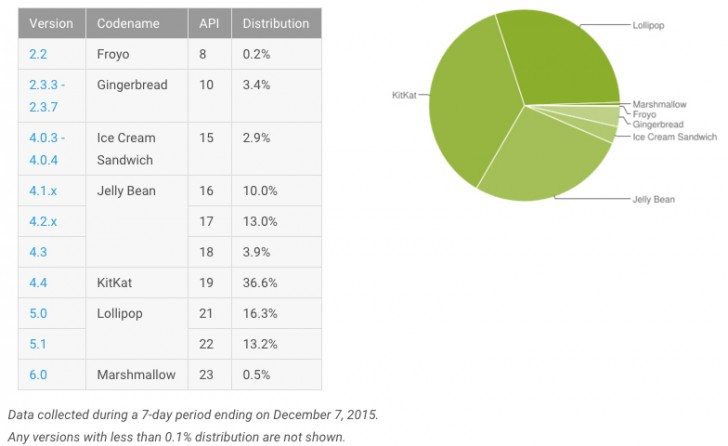 After Lollipop, we have Android Jelly Bean that is installed in 26.9% of all devices. This is a drop from last month when that figure stood at 29%. This figure includes all Android versions between Android 4.1.x to Android 4.3.

Android Gingerbread, Ice Cream Sandwich and Froyo are also being used and currently have a market share of 3.4%, 2.9% and 0.2% respectively. It is interesting to see Froyo is still on the market years after it was released.

Google’s latest public release, Android Marshmallow has gained some ground and now stands at 0.5% market share. This is a rise of 67% from the same time last month when it had a market share on only 0.3%. Expect this number to continue rising as more manufacturers update their devices in the next two months or so.