At the beginning of every month, Google normally releases the latest Android distribution numbers to give us a clue as to which versions are popular and which are not. These numbers are very important to developers as they need to develop apps that stand to get the highest number of downloads.

The latest figures show that Android 4.4 KitKat is still the most popular version with a market share of 37.8%. This is a drop from last month when it had 38.9% market share. In case you didn’t know, Android KitKat has been around since September 2013. 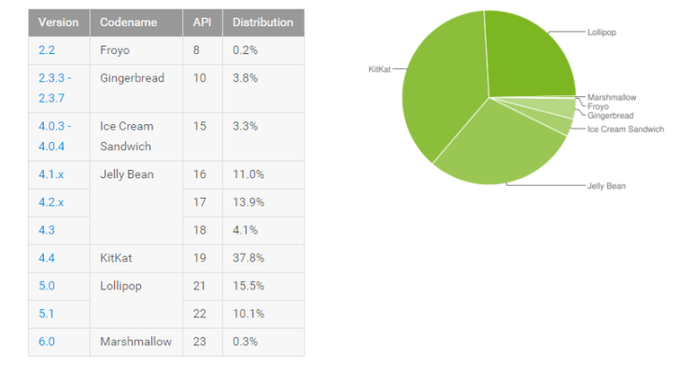 The new Android iteration, Android 6.0 Marshmallow has also made it to the list. It has even managed to beat Android 2.2 Froyo to command a market share of 0.3%. This may not be huge but considering that Android Marshmallow has been around for just a few weeks, it is amazing. As manufacturers update their devices to this new version, expect its market share to go up in the next one month.