Instagram, the Facebook-owned photo and video sharing platform, is officially ten years old today. The app was launched on October 6th, 2010, precisely a decade ago. As part of its celebration, the app has shipped a hidden trick letting you change its home screen icon to one of the classic icons that have been continuously changed since inception.

Here’s how you can change the icon:

Here’s a vid of the secret! ?? pic.twitter.com/ZlRIWWa0s7

In addition to that, Instagram has announced a couple of new features coming on the platform soon. The first is the addition of two new features on existing anti-bullying tools. As an additional way to prevent bullying comments, Instagram is testing a new feature that automatically hides comments similar to others that have been reported.

And for those who bully other users on the platform, Instagram is expanding in-app warnings when they try to post vile comments. The company says they will now include an additional warning when people try to “repeatedly attempt to post potentially offensive comments.”

These additional warnings will now include a message that the platform may delete a user’s account if they proceed and post the offensive comment. However, similar to the previous anti-bullying tools, Instagram doesn’t prevent users from posting nasty comments yet.

The company is also re-introducing photo maps, which initially let users see where pictures were taken from. Instagram removed photo maps on the platform in 2016, over low adoption, but the latest iteration has been remastered. 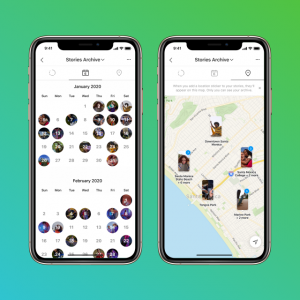 You will now see a snapshot of your photo maps in your Instagram’s Story Archive. Photo Maps will only be visible to you and will only track locations of your Stories. That is different from the original feature that allowed users to brag about their travels on Instagram. Sorry, influencers.

Other upcoming features include tabs for Reels and shopping and updates to messaging on Instagram.