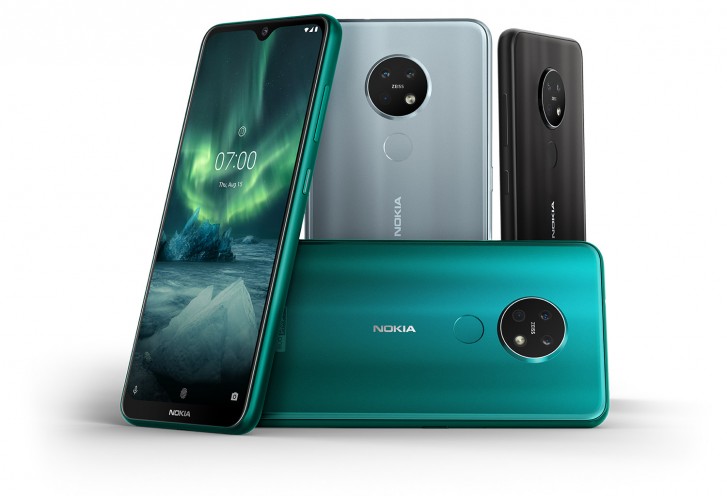 Just as expected, HMD Global announced new devices at its first appearance at Europe’s best electronics show, IFA, taking place in Germany. Nokia announced a total of five devices, including the Nokia 6.2, Nokia 7.2, two KaiOS devices, and feature phone. However, the Nokia 5.2 did not make an appearance at the show.

Nokia 6.2 takes over from the Nokia 6.1 launched last year. The Nokia 6.2 features a triple camera setup on the rear with a circular camera bump. The triple rear camera setup is made of a 16 MP, f/1.8, (wide) snapper, 8 MP, f/2.2, ultrawide sensor and a 5 MP camera for depth sensing. Main camera features include a LED flash, panorama, and HDR.

Despite the device having a 3500mAh Li-Po battery, Nokia promises 2-days of battery life. The Nokia 6.2 has a 6.3-inch IPS LCD capacitive touchscreen with 1080 x 2280 pixels presented in a 19:9 ratio (~400 PPI density). The display is protected by Corning Gorilla Glass 3 protection and has HDR10 support.

The Nokia 7.2 features a similar display size and type like the Nokia 6.2. Under the hood, the Nokia 7.2 packs an Octa-Core Qualcomm Snapdragon 660 paired with Adreno 512 GPU.

The rear features a triple camera setup with a 48MP primary snapper + 8 MP, f/2.2 ultrawide sensor + 5 MP, depth sensor. The selfie camera is a 20MP shooter housed in a water-drop notch. The device is also powered by a 3500mAh Li-Po battery with 10W fast charge support.

Nokia also announced a new KaiOS smart feature phone. It sports a classic flip-back design like old-feature phones. However, with KaiOS under its hood, the Nokia 2720 flip has digital applications like Google Maps, WhatsApp, Facebook, and you can even install more.

Nokia 110 follows up on the Nokia 105 feature phone with some improvements over the predecessor like support for 32GB microSD card.