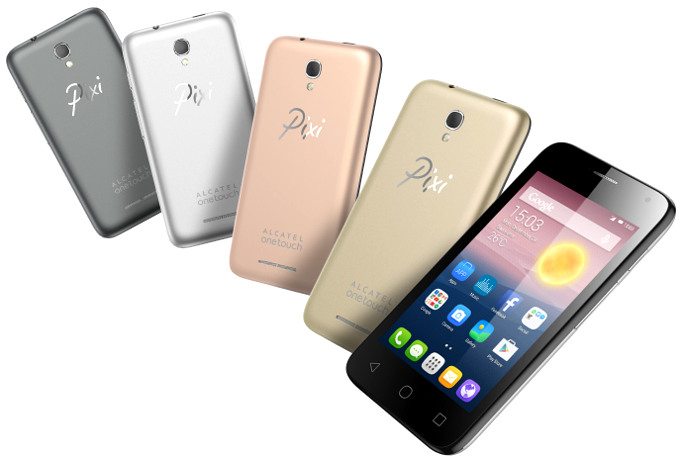 Last week at IFA 2015, Alcatel OneTouch introduced a number of devices for all market segments from high end, mid-range and even low end ones. We already told you about the Alcatel OneTouch Idol 3C which is seen as a premium smartphone at half the price.

Read More: Alcatel Unveils the OneTouch Idol 3C, a premium device at half the price

As for the low end market segment, Alcatel introduced the OneTouch Pixi First. The phone has a 4 inch display which is quite small going by today’s standards. Considering its low end price tag, there is no need of complaining about the screen after all. The screen has a resolution of 480×800 pixels.

Underneath, the Alcatel OneTouch Pixi First has a 1.2 GHz quad-core Spredtrum7731 processor which is combined with 512MB of RAM. As you can see, these are not appealing specs but keep in mind this phone is targeting the low end market segment.

At the back sits a 5MP camera with a 2MP front facing camera for selfies. The 5MP camera at the back is able to shoot 1080p videos which is quite nice.

The OneTouch Pixi First is powered by a small 1450 mAh battery which Alcatel says can last for up to 7 hours of talk time.

The phone will be available in Soft Slate, Metal Silver, Metal Gold and Rose Gold colors. Alcatel has not revealed how much they will be selling at but they will be affordable.