Apple’s Sapphire Screen may not be that strong. 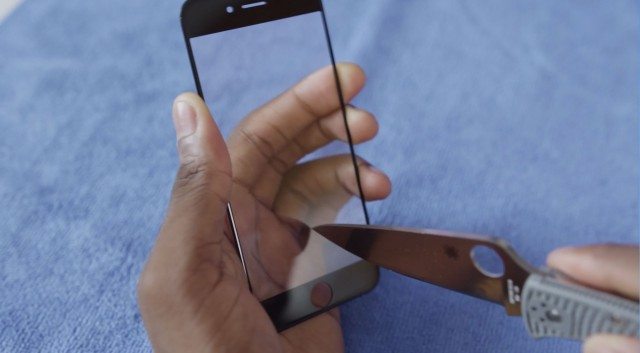 The iPhone 6 has been one of the most talked about gadgets lately, despite the fact that it is yet to be formally released. One particular part that has elicited a lot of interest is the screen, which is supposedly going to feature Sapphire, one of the hardest materials known. (Read initial insights on the screen). With this revelation, most people sought to know the overall strength of the material, as it is not easily heard of in most platforms. Initial tests proved that the material was pretty tough, and it seemed virtually indestructible in relation to the daily use for which a mobile device is to be subjected.

However, as always, testers always go the extra mile until they discover a device’s vulnerabilities. IPhone 6’s sapphire display is no exception, and its limits have already been identified. Apparently, the material bows down to sandpaper. A YouTuber, Marques Brownlee, who initially tested the strength of the Sapphire, identified sandpaper as the display’s conqueror, inflicting significant marks on it after a few scratches.

Though this may not seem to be a significant discovery at surface view, it highlights the level of purity of the Sapphire used. Pure Sapphire is rated higher than quartz/silica-the major element in sand-in terms of strength. Technically, this means that the Sapphire screen should be in a position to withstand sandpaper scratches if it is indeed made out of pure Sapphire. The fact that this is not the case means that the Sapphire used in the iPhone’s screen is not pure. Again, this makes sense since using pure Sapphire would be an extremely expensive venture that would be unsustainable, if not making iPhones extremely expensive.

Despite being used minimally, the Sapphire screen is still significantly stronger than Gorilla Glass 3, the mainstream form of protection for most flagship phones. Remarkably, the iPhone 5S’s touch ID sensor could be covered in higher purity Sapphire, since it survived the sandpaper test to a much larger extent. This is particularly practical since scratches and flaws over the sensors could invalidate a user’s true fingerprint, potentially locking the device.

Considering all factors, Apple is operating within the confines of all that is possible as per the contemporary limits of technology. Apart from the cost issues, making the screen from pure Sapphire would make it brittle, and susceptible to the slightest of stress. This means that as much as it would be virtually scratch proof, minor strains could crack it, or shatter it to tiny pieces.

Apple continually positions itself within the boundaries of technology and this is yet another instance where they have set the bar higher. The good thing is that it always results in some high end products, in addition to pioneering the birth of new ways to counter challenges in the industry. All said and done, we cannot draw our conclusions fully, not until the devices are officially released.