How the Global Entrepreneurship Summit 2015 Played Out On Twitter 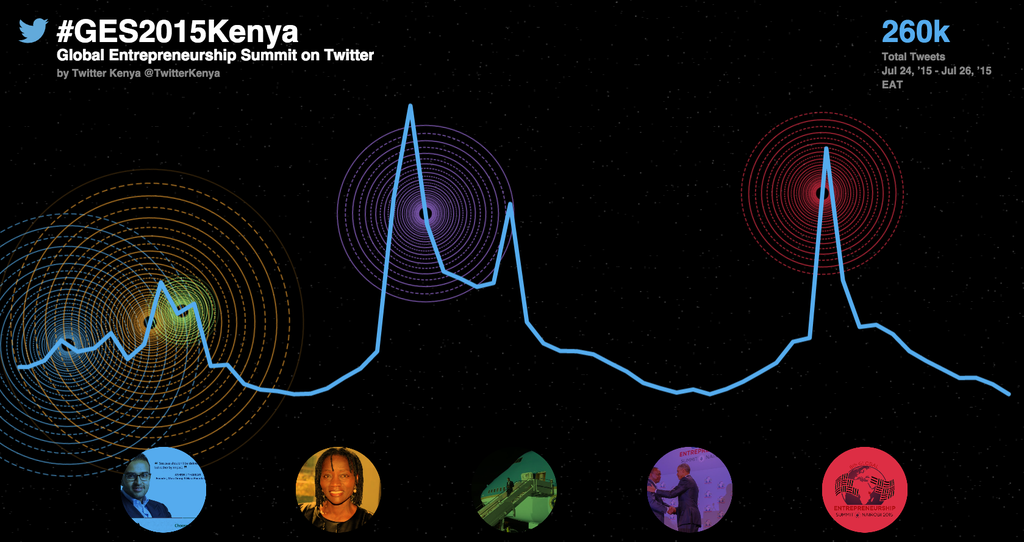 The global entrepreneurship summit took place this past weekend and Kenya was lucky to play host to it. The summit saw the US president take part and this helped shaped how things turned out on Twitter.

With the US president around, most people focused more on his presence in the country and forgot about the summit itself. This does not mean that the summit was ignored completely as some people still took time to follow the GES event or share their experiences on Twitter.

Some of the tops hashtags that were used this past weekend include #ObamaHomeComing, #ObamainKenya, #ObamaReturns and #GES2015.by the end of the weekend, there were over 260,000 tweets around this summit using the  #GES2015 hashtag. At some point, on July 25 at exactly, 11:31 am, there were 350 tweets per minute on this summit using #GES2015. This is the same day that the US president and the Kenya president officially opened the summit so this makes sense.

From the data collected, it is clear that interest in this event and everything around it picked up with time as from July 24. As the US president landed in Kenya that night, the number of tweets using #GES2015 spiked to 140 per minute. This was quite a huge move given that the number was significantly low below that even though there were some activities around the event already happening at the KICC.

Surprising enough, the tweets still kept following even during late at night and at no time were there no recorded tweets on this event. So, while you were asleep, someone was for some reason tweeting about this event.

These numbers can be very important to any digital marketer as you can look through them and try to make sense of them. They provide some interesting stats that might help you out in your digital marketing activities.