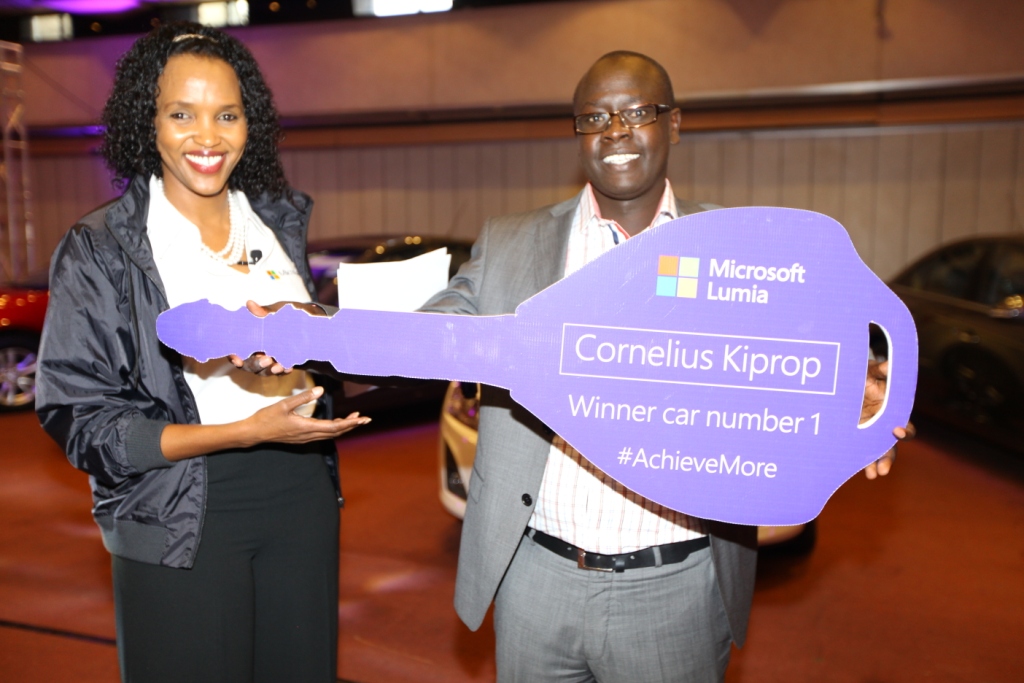 Back in March this year, Microsoft introduced the #AchieveMore campaign as the company unveiled the Lumia 640 and Lumia 640 XL in Kenya. The competition was to run till June 30. At the end of it all, five lucky winners were to drive away with Chevrolet Cruze Saloon cars.

Microsoft marked the end of this campaign today as the company gave the winners keys to their new cars. All five winners were presented at the grand finale party and they got to drive off with their new cars valued at Ksh 17 Million combined. To win, participants had to buy any Lumia smartphone and send the IMEI number to  22860 to get into the draw.

The campaign was premised on Lumia’s value proposition of providing a device that integrates both work and play to enable users achieve a work life balance and in turn do more with their smartphones.

Throughout the 8-week long campaign, consumers got to learn more about Microsoft’s services and Lumia devices. Services such as OneDrive, OneNote, Skype, a free one year subscription to Office 365among others gave users value for their money.

The winner of the first car was Cornelius Kiprop who seemed excited with the win. He said, “I couldn’t believe my luck. I saw a Lumia billboard in Nairobi and immediately participated in the competition after purchasing a Lumia 640. The device has increased my productivity greatly as I can access my documents from anywhere using OneDrive and I’m thankful to Microsoft for the car”.

Read More: The First Winner of the Five Chevrolet Cruze’s Has Been Announced

Kennedy Ngige, a 35 year old truck driver from Kitale was also one of the people who walked (read drove) away with a Chevrolet Cruze. He was the most doubtful of the five and only yielded to the insistence by the Microsoft team notifying him of the win.  He had this to say, “I thought it was a hoax. I doubted the authenticity of the phone call and actually thought it was an attempt to defraud me. I had to go to the shop to verify before I could believe it.”

When presenting the cars to the winners, Microsoft Mobile Devices General Manager Mariam Abdullahi said, “We are indeed happy to fulfil our promise with the presentation of this unique salon cars to users that have gone ahead to achieve more and increase their productivity with our Lumia devices. I hope a lot more people will be inspired by this”.

Read More: Meet The Second Winner of a Chevrolet Cruze in the Achievemore Campaign

Even as the campaign ends, Microsoft has promised to continue championing productivity through innovation as it builds smart devices capable of enriching the lives of users around the globe.