Facebook acquired WhatsApp last year for $19 billion leaving us confused as to what the company wanted to do with the popular messaging app. At this point, we have not seen any significant moves by Facebook as it tries to monetize WhatsApp. When acquiring WhatsApp, Facebook said that the messaging app will work independently so this does not surprise me at all. Even with this, WhatsApp will have to make money in some way so Facebook will have to be involved in some way.

Read: Voice Calls Will Be Available On WhatsApp Very Soon

Read: What You Need to Know About the New Voice Calling Feature by WhatsApp

The button is only available to a few users so it’s probably still in beta mode meaning that you will have to wait a little bit longer to get. Have a look at the screenshot below. 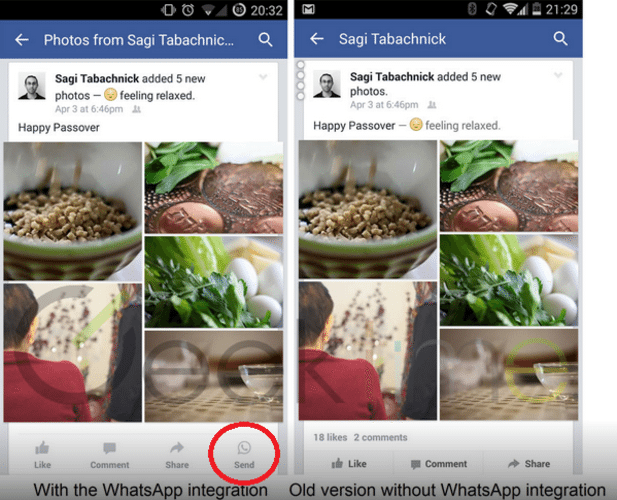 With this initial integration, expect Facebook and WhatsApp to continue working together very closely. How far their partnership will go is hard to tell at this point since both companies are keen to operate independently. The goal for Facebook is to ensure both apps get enough traffic (which they do) and they can probably monetize that. How exactly they will do that is still not known.  Probably they will start with cross platform messaging between the two apps to get even more traffic.

With WhatsApp integration, expect Facebook messenger app to see a decline in users. Keep it here to be informed when the feature comes out of beta as is available to the public.