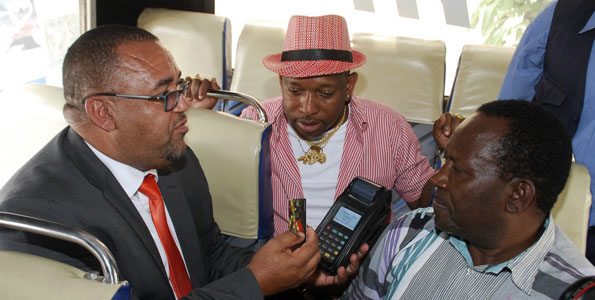 Kenya has poor road networks that make commuters everyday spend hours on traffic on distances that would take few minutes.That not being enough trouble on a beautiful morning,the agony of a rude and arrogant matatu tout or conductor makes your day even more worse when you give them a 500 or 1000 bob note and they claim to have no change.A few exchanges of words and insults ends up killing your morale and the matatu tout kinda has no stress because they are used to the “word wars”.

Whats even worse is leaving your crib in a hurry and your late only to discover you don’t have your wallet on you and you have to face the ruthless matatu conductor who would now be more willing to  you embarrass you to the whole world that your broke and irresponsible.

There are three electronic cards in the market: Beba pay, which is a joint venture between Equity Bank and Google, 1963 Jinice operated by the Matatu Owners Association and Abiria Card operated by the Kenya Bus Service and KCB with Several players, including banks and payment processing firms, have already partnered with bus companies to roll out debit cards to be used by commuters.

The cash less system is now expected to explode soon and its culture spread after a press statement on telephone by Mr Francis Meja, the director-general of the National Transport Safety Authority (NTSA),said that,“The CBK has cleared four banks and others are in the pipeline. CBK has vetted the vendors and approved the settlement process.Approval by the CBK was the main challenge that held us back because public funds were involved. Now that we have got clearance, the Cabinet Secretary (for Transport and Infrastructure) will give a statement soon on the way forward”