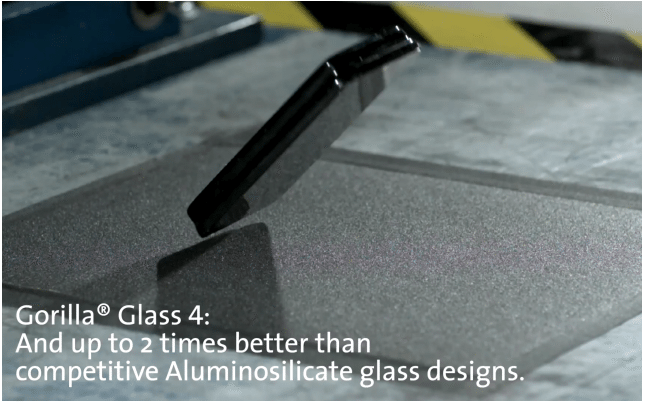 Corning’s Gorilla Glass has already revolutionized the smartphone industry by providing relatively tough protection against scratches and any other form of wear. Most flagships are covered by a layer of the protective Gorilla Glass, and this has often resulted in improved durability and resistance for the devices. Corning has had some relative success in offering its protective glass cover. There have been various iterations of Gorilla Glass, with the one currently existing in the market being the Gorilla Glass 3. Obviously, Gorilla Glass 3 is more durable and thinner than its predecessor, Gorilla Glass 2. While they both offer some serious protection against the small scratches and stresses of daily use, the major problem has always been drops that often shatter a phones screen irrespective of whether it has Corning’s Gorilla Glass. Well, it seems that Corning has taken note and reacted to the menace of shattering screens by offering anti-shatter protection in their latest provision, Gorilla Glass 4; if their words are anything to go by.

According to Corning, Gorilla Glass 4 will offer up to 80% chances of survival on drops directly on hard surfaces such as concrete. This is despite the fact that it is 0.3mm thinner than Gorilla Glass 3, the current champion against scratches. As such, Gorilla Glass 3 is 0.7mm while Gorilla Glass 4 is a mere 0.4mm thick. It is quite incredible how this is achieved to the level that Corning is able to proudly state that their new provision is up to 2 times stronger than any other competitive glass.

We will most probably see devices with Gorilla Glass 4 starting next year, and it will quite exciting to see how it holds up against the various drop tests that always characterize the release of devices. It is also worth noting that Corning is releasing their glass in the wake of the ugly circumstances surrounding the souring of the deal between Apple and GT Advanced Technologies, the company that was to facilitate the use of Sapphire glass on iPhones. Indeed it would be interesting to see the Sapphire screens materialize as already pioneered by the Huawei Ascend P7 Sapphire Edition, and a comparison between Sapphire screen and Gorilla Glass 4 would culminate in the ultimate champ in screen toughness.