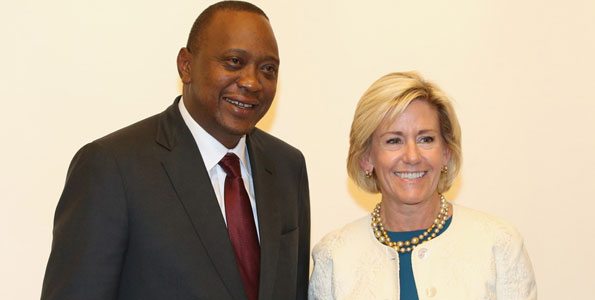 Safaricom has the largest Telecommunication network subscribers in Kenya,followed by Airtel and Orange Kenya.A deal that was brokered by President Uhuru Kenyatta saw Safaricom strike a deal with Money gram for money and cash transfers internationally.The collabo between the the giant telecommunication company and the successful US based firm money gram will target more than $1 billion (KShs90 billion) sent in remittances every year.

This will ensure over 22Million Safari com customers receive direct cash transfers to their Mpesa mobile accounts from money gram with the access of over 90 Money gram outlets all over the world.This obviously brings efficiency and reliability to its customers eliminating the hassle of having to look for the nearest bank with money gram services for withdrawal or deposits.

The deal is expected to drive growth in Safaricom’s M-Pesa division and boost Kenya’s remittances, a key source of hard currency for east Africa’s biggest economy.

“This new relationship with MoneyGram enables us to tap into remittances coming in from Kenyans living in other countries,” Safaricom Chief Executive Bob Collymore said in a statement on Wednesday.

The move by Safaricom top executives and the President Uhuru Kenyatta was necessited by stunning figures from central bank which showed amount of remittances sent into Kenya by its citizens living abroad rose 20.34 per cent in August from the same month last year to $128.8 million (Sh11.4 billion), with 49.7 per cent of the remittances coming from North America.

Kenyans abroad sent a total $1.3 billion (KShs116 billion) in remittances in the whole of 2013 alone.The move is also to boost Safaricoms profits,with the Company earlier on this week announcing its quarter profits.Safaricom posted a 32.7 percent jump in pretax profit for its first-half ended September to 21.1 billion shillings ($235.75 million), the firm said on Tuesday.

The largest telecoms operator in the country, which is 40 percent owned by Britain’s Vodafone, said its earnings before interest, taxation, depreciation and amortisation (EBITDA), rose 16.2 percent to 33.5 billion shillings.

Mr Collymore told media personalities and share holders that non-voice business had delivered strong growth but maintained that voice remains the company’s core business though its contribution to total turnover continued to decline as it diversifies into data, handset sales, and mobile money services.

“The company posted a 47.4 per cent growth in earnings per share (EPS) to Sh0.28, outperforming our estimate of 30 per cent,” SIB said in a statement.