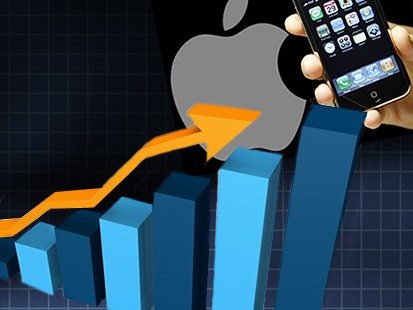 The Samsung Note was seen by experts and analysts as kinda of a market ruiner of the Iphone 6 and Iphone 6 plus sales.Some people even accused Samsung of creating and making the #bendgate scandal critic such a big deal to discourage Apple lovers and fanatics from purchasing the Smart Phone.However it looks like things aren’t so bad at Apple headquarters,in fact the sales are reported to beat “wall street expectations” and featuring  profits 16% up of the Iphone series range of Smart phone than last year stat profit reports.

Iphones: Apple claims to have sold 39.3 million Iphone units in the past quarter inclusive of two weeks which integrated sales of the Iphone 6 and Iphone 6 Plus.Apple top executive Mr Tim Cook however said that there’s  huge potential for the Iphone 6 sales to continuing growing despite the fact its always a tradition for Apples profits to improve when a new product hits the market.The Fourth quarter stats show some really promising expectations from the new Iphone 6 and Iphone 6 Plus. 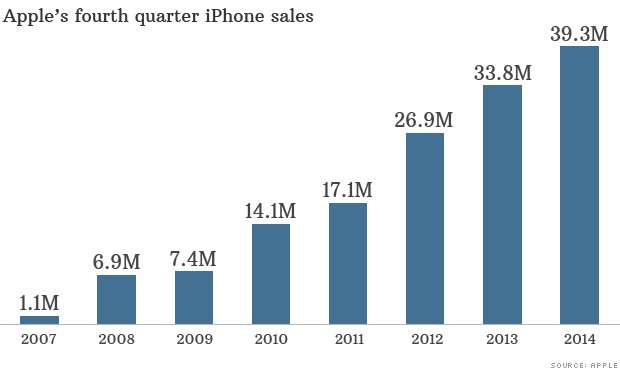 Mac Books:Since the earliest invention of a computer and grow in its interests and awareness since 1995 Apple has had its equal share in the computer niche and market with the likes of top guys like Hp.The last quater saw Apple break its previous Mac sales records,that were up by 21% doing quite impressive than the previous year 2013.Apple sales report show of 5.5 million Macintosh computer sales that is definitely expected to boost its profitability.With the 5K Resolution Mac computer hitting stores its quite indisputable the figures and stats might shoot further upwards.

Ipads: The Ipad 2 and I pad Mini were launched at Apple event along side the Iphone 6 and 6 Plus.The Ipad Air gloats of being the best and probably the slimmest tablet in the market and obviously in the world.We sure hope Samsung will release a more better enhanced tablet version to counter attack the Ipad 2 and Mini 3 aroused interest growth.Its for sure the Ipads will be over priced as Apple is known for concentrating only on the upper social class customers and individuals.Last year Apple also sold 12.3 million iPads, which was the latest disappointing result in a series of bad quarters for Apple’s tablet.IPad sales were down 13% from last year, the third straight quarter of shrinking iPad demand and the smallest number of iPad sales in more than two years.

The Ipad 2 and Mini 3 being seen as the “saviors” of Apple’s Tablet market ,consumers and Apple fans hope of a powerful and reliable product from the Company.