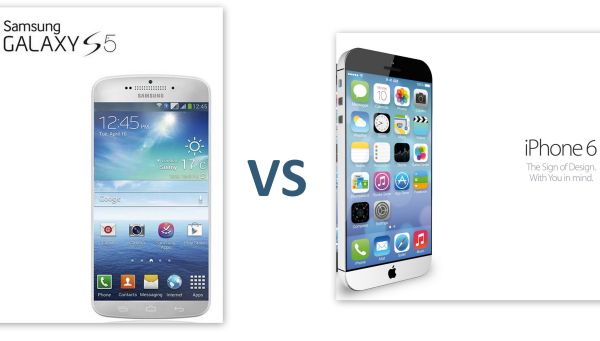 You might all have heard about how Samsung ridiculed and made fun of I phone,after it unavailed the I phone 6 and I phone 6 Plus after the IFA event.Many people actually thought of the I phone 6 plus as contradictory statement as the Apple Based Company had a “no big screen Campaign” on its devices.This means the decision to actually integrate a 5.5 “on the I phone 6 Plus is quite ridiculous and a rebut of its Policy.

The I phone 6 isn’t all that bad but,personally what i love about Apple products is the Camera Photo quality.The Camera technology is so great that a 5mp Camera can go head on with a 16 Mp Camera from a Samsung Device.,that’s actually amazing.

I phone 6 Plus Specs Protection is by oleo phobic coating with shatter proof glass Well Samsung really made fun of Apple’s I phone 6 Plus,may a quick review between these two devices ought to settle the beef and rivalry and declare the winner.

Samsung Galaxy s5 and the I phone 6 Plus Specs  Comparison

1.The I Phone 6 plus is definitely bigger by a(o.4″) difference to the S5.However the S5’s  display looks better as it uses the Super Amoled tech making the Smartphone outstanding for gaming and HD Videos.We however cannot “diss” the I phone 6 Plus display mechanism ,but personally the Super Amoled display is a “killer” to any Smart phone

2.The S5 knocks down the I phone 6 Plus CPU Power as it hosts a Quad core Processor ,compared to the I phone 6 plus Dual core engine power.

3.The Price is yet another issue.Apple products are known to be over priced making their availability limited to some middle class individuals and mostly upper social class type.

4.The Camera issue is however a tricky one as Apple products suprisingly tend to feature lower Mega Pixel on their Cameras but the photo quality is just out of this world.The S5’s Camera saw some major improvements integrated more stuff into its Camera like the HDR feature boosting its quality  and performance.On this one i would say its a perfect draw.

5.The Samsung Galaxy S5 Battery is bigger with more “juice and power” a 280o A mh Battery compared to the 2115 of the I phone 6 Plus is a vital major difference.