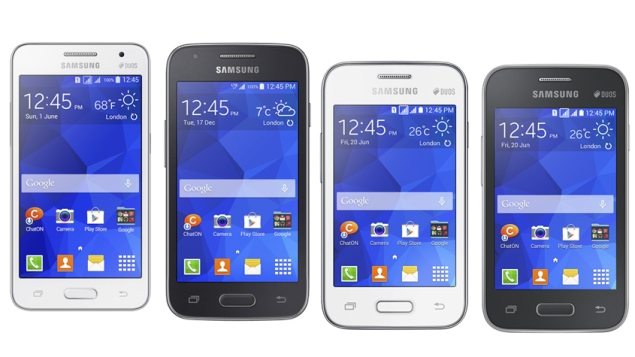 Samsung is undoubtedly the king of the Smartphone market, everywhere you look, you will find a Galaxy Smartphone. These Smartphones range from the high-end premium lines to the entry level devices. Samsung focuses on this strategy to build something for every consumer and thus remain relevant throughout the market at all times.

To ensure this status quo remains, the company has announced four new Smartphones to join the Galaxy family. These are the Galaxy Core II, Galaxy Ace 4, Galaxy Young 2 and the Galaxy Star 2. All these four Smartphones are made for the budget conscious customers and will come with Android 4.4 KitKat straight out of the box. They will also have Samsung’s TouchWiz Essence skin on-top of Android.

Specifications under the hood will vary with the Galaxy Core II having a 4.5-inch screen (WVGA most probably), 1.2 GHz quad-core processor, 768 MB RAM and 4 GB of memory that can be expanded up to 64GB. It has dual SIM capabilities with a 5MP camera and a 2,000-mAh battery at the back.

Samsung has not confirmed the pricing and availability of these devices but I expect them to be available in retail stores very soon and at reasonable prices.