Nokia tried their luck in the Android ecosystem with the Nokia X in February this year. The company launched 3 iterations of this device including the Nokia X, Nokia X+ and Nokia XL. The devices were unveiled in Kenya in March and were moderately successful. I say moderately successful as they did no sweep the country by storm like the now infamous,  ideos Smartphones initially launched by  Huawei.

Enough with the brief history of the Nokia X. Let’s focus on the future of these devices if they even have one. Nokia’s mobile division was recently acquired by Microsoft and by the look of things, Nokia X series will remain for now. 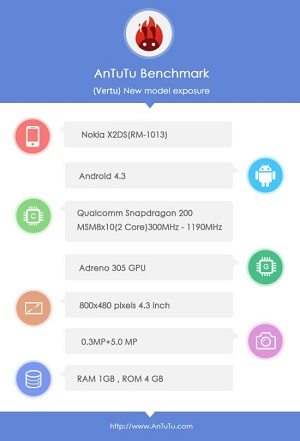 If the recently leaked benchmark results are to be believed, Nokia is working on Nokia X’s successor, the Nokia X2 that it will unveil anytime from now. If we are to believe these recent leaks, the Nokia X2 will still be an entry level Smartphone. The device will be powered by Android 4.3 and Qualcomm Snapdragon 200 dual-core processor under the hood. It will have 1GB RAM and 4GB of ROM. The screen will have a size 4.3 inches with a resolution of 800X480p. At the back, there will be a 5MP camera with a 0.3 MP one at the front.

This is just a leak and should be taken with a pinch of salt until Nokia or Microsoft for that matter tells us what the future holds for Nokia X.