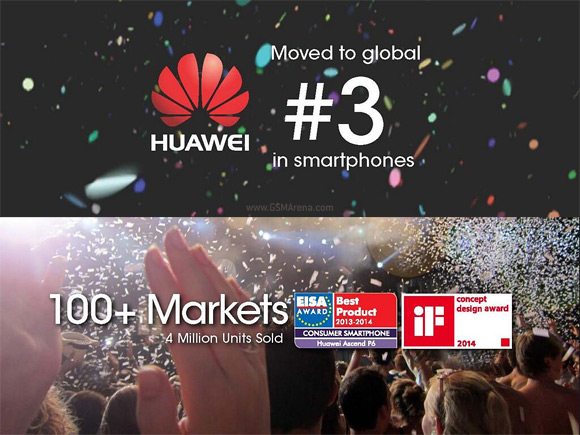 Sometime yesterday, Huawei unveiled their next flagship Smartphone for 2014, the Huawei Ascend P7. The phone has some decent specs and takes over from the Ascend P6 that was unveiled last year. After the launch, Huawei continued to share some good news revealing that it had sold over 4 Million units of the Ascend P6 so far. This is quite a significant figure for Huawei as it tries its luck in the premium Smartphone sub sector.

After announcing the sales numbers for the Ascend P6, Huawei also revealed that it was now the third largest Smartphone manufacturer behind Samsung and Apple. This is based on the number of Smartphones the company has shipped to retailers so far in 2014. According to a research company, Strategic Analytics, Huawei shipped over 13.4 million Smartphones during the first quarter of 2014 compared to the 10 million units it sold over the same period last year. This increase in sales is largely attributed to the Ascend P6. 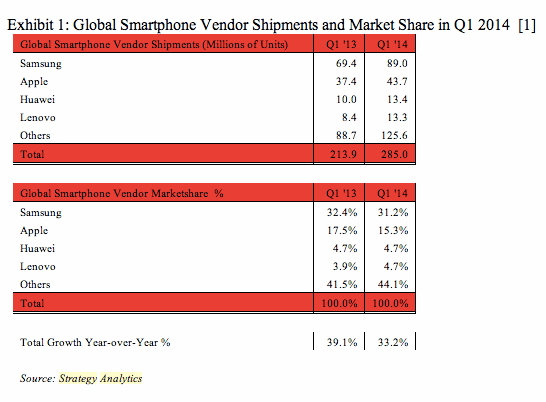 The report by Strategic Analytics also shows that Smartphone shipments during the first quarter of 2014 increased by 33%. Samsung shipped 89 Million units during this period while Apple shipped a little over 43 Million. It is important to note that these numbers do not include shipments for the new flagship from Samsung, the Galaxy S5.

With the announcement of the Ascend P7, it will be interesting to see how Huawei navigates the Smartphone market competing head-to-head with the Galaxy S5.