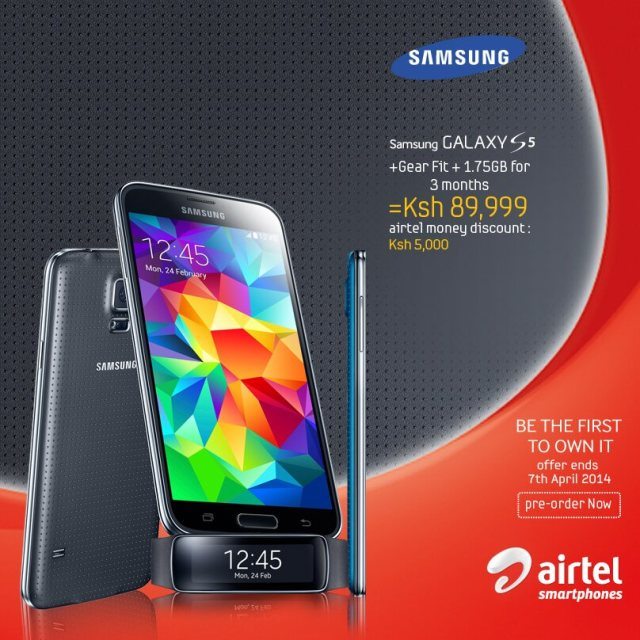 When it comes to the Galaxy S devices from Samsung, no one beats the hype they come with. These devices are usually over hyped even before they are announced and the trend continues till they hit the stores.

The recently announcer flagship, the Galaxy S5 is no different. The device was the source of a ton of rumours before it was officially announced at mobile world congress. Announcing the device did not stop the rumours and attention as most people shifted camp and are now speculating on its price and expected sales figures.

Retailers have also been keeping a close eye on the Galaxy S5 and most have even gone ahead and given consumers a chance to pre-order the device and be among the first consumers to stock it. I have already told you about another company, Jumia, that is also taking pre-orders for the Galaxy S5.

Another company that had jumped into this bandwagon is Airtel. The company is not just offering u the Galaxy S5 but is coupling it with the gear fit that was also announced recently by Samsung. Getting these two devices on pre-order from Airtel will cost you Kshs. 89, 999. If you do not want the Gear fit, you can get the Galaxy S5 plus 1.75GB of data for only Kshs. 69,999.

So don’t be left behind, head over to Airtel and get your galaxy 5 before everyone else. Here is the link to the page where you can pre-order it.